WHY am I such a dork 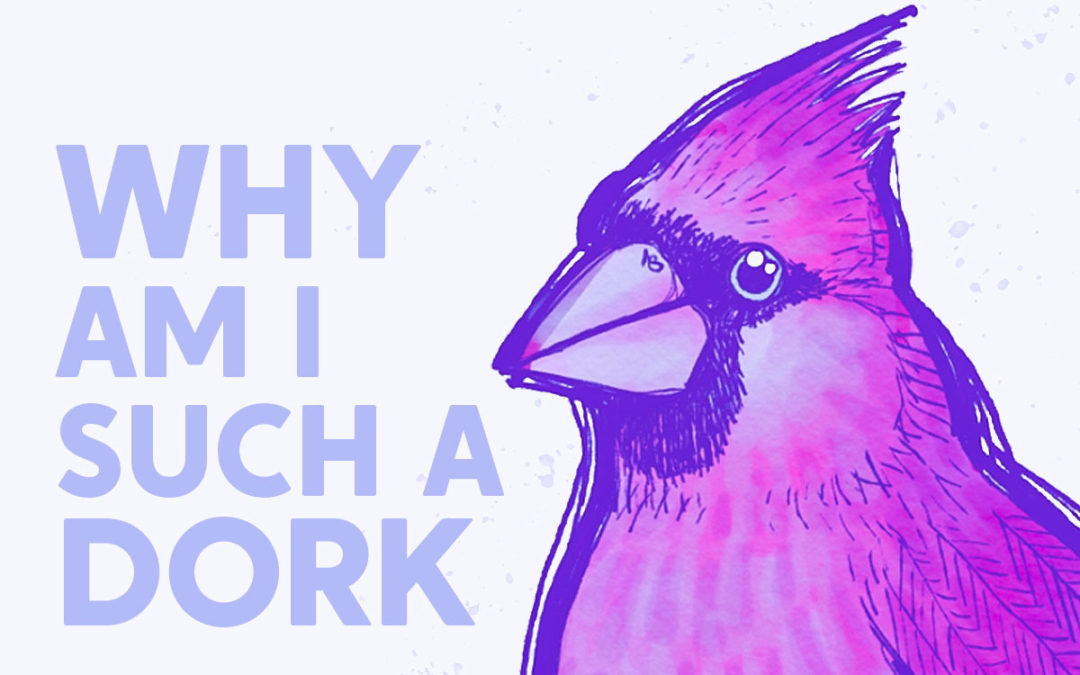 Let me tell you a little story that will make you feel better about yourself.

Once upon a time in the distant mild hills of Northern Wisconsin, I grew up in a quaint little town where my only connection to the outside world was Nickelodeon and a hit music radio station that went static whenever I walked into the room.

In this mystifying land there was a phenomenon that was relegated – as far as I can tell – to the flyover states. I will refer to this as the “frumpy sweatshirt” phenomenon.

This was a heavyweight sweatshirt which may or may not have had a built-in butterfly collar.  The subject matter on the shirt soothed the wearer, and included such motifs as regional song birds or domesticated animals. Seasonally, these shirts were known to depict holiday icons such as jack o’ lanterns and Santa Clause. The look paired well with high-waisted jeans, turtlenecks and poofy bangs.

At the height of its popularity, this die-hard phenomenon appealed mostly to middle-aged women (and older) and ran parallel to other trends, including another sweatshirt fad that appealed to my 6th grade classmates.  But instead of quaint little characters, the subject matter in this style was name brand logos.  Examples included Z. Cavaricci, ESPRIT, CK One, Reebok, Nike, etc.

My family was too unaware and financially unable to partake in the latter trend, defaulting to the former with this added twist: the subject matter was cut from patterned fabric and decorated with puffy paint outlines. In other words, my mommy made them for me.

And hot diggity dog where they ever comfortable. 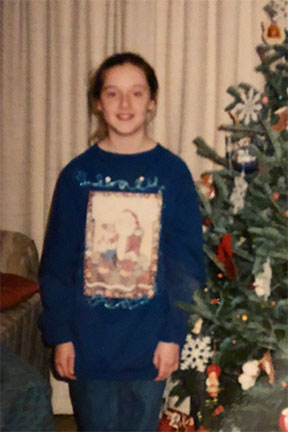 One day in class I had a sudden epiphany which caused me to stop what I was doodling, look up, turn to my classmate and exclaim, “My clothes are nerdy!”  She looked at me, surprised at my sudden realization and said, “Yeah they are.”

The paradigm had shifted. No longer was it passable to wear a shirt simply because you liked kittens. Desperately I tried to distance myself from the shirts my mother had crafted for me. She didn’t understand why I refused her love. I purchased what shirts I could afford on my $6 per week allowance with less-than-stellar name brands plastered across the chest. It wasn’t long before others caught on to the fact that I only wore 5 shirts and they were all earmarked for specific days of the week.

Eventually the emphasis on name-brand shirts tapered off and I was able to get by on cheap ol’ patterned and solid shirts. However, the frumpy sweatshirts continued to resurface over time.  In the mid 00’s they were still quite common in my Taste of Home magazines.

I recall one particularly jarring recurrence as an adult when I visited my sister in Italy.  I had purposefully packed all-black outfits because, as everyone knows, this was how to blend in with the locals.  It wasn’t until I stepped off the plane with my mother that she took off her jacket and revealed her sweatshirt, complete with snow-covered chickadees.

Fast forward more than 10 years later.  I am now the same age as the women who kick-started that fad in the 90s.  I saw a lady who was STILL WEARING THAT KIND OF SWEATSHIRT and I couldn’t help but feel jealous that she was wearing it so unashamedly.

So here’s where I’m at:  I am both uncomfortable and comfortable with how comfortable I am with this comfortable sweatshirt style. I pull the look off a little too well, too.  Being the problem solver that I am, I came up with my own frumpy sweatshirt:  Cardinal Nouveau.  It’s a classic northern songbird but with a twist – you know – because the colors are whacky.  Maybe I’ll create a whole line of these frump-tastic shirts.  In the meantime can we just make this kind of sweatshirt OK to wear again…. please?? 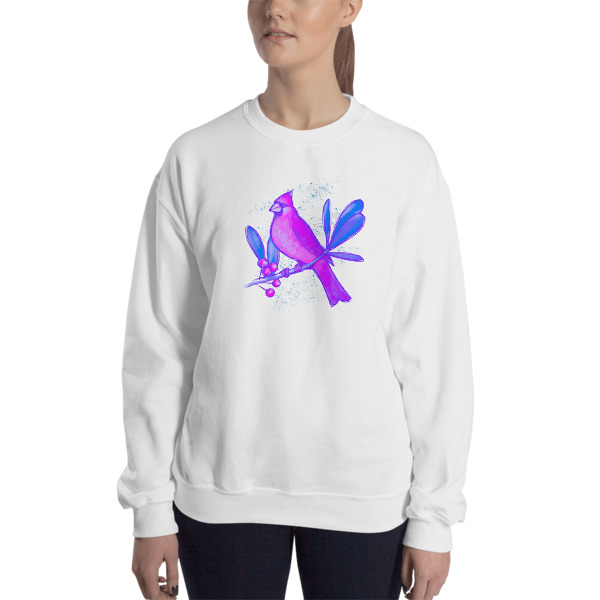