The Architecture of Memory 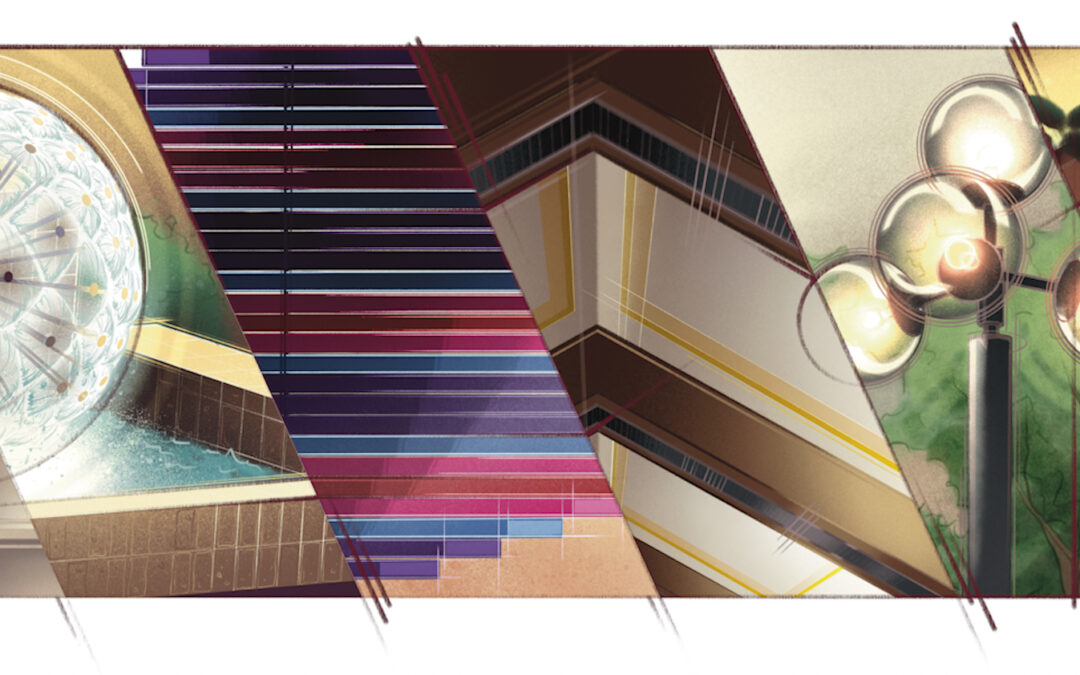 An image from my digital art projection,  The Architecture of Memory, is above.

The art projection video is available below (scroll)

This piece was on display for the Historical ARTspective: 150 Years of Wausau** exhibit in the Caroline S. Mark Gallery at the Center for the Visual Arts in Wausau, Wisconsin (November 4 – December 23, 2022). The projection included the final piece plus time lapses of each cartouche next to some of the images used for inspiration. A written piece that accompanied the projection can be found below:

The Architecture of Memory

When I found out I was to create an artist interpretation of Wausau Center, I was thrilled. I loved that place! But then I realized… so did everyone else. How could I, with my specific art style, properly honor the mall in a way that’s meaningful to everyone? Despite being historical enough to take up nearly a third of Wausau’s 150-year history, it existed so recently it impacts everyone’s real memory.

But then, what even is “real” memory? Isn’t memory abstract? It’s certainly not a solid object like a building.

My earliest memory of the mall is my mom pushing me in a stroller. I can still hear the bump bump of the wheels rolling over the tile floor and echoing through the gargantuan space. At that age, I would have been too young to process my surroundings or ask the right questions.

Where am I?
What am I doing here?
Why are lampposts and trees inside a building?

I researched memory for this project. In summary:
it’s complicated. Memory touches different parts of
the brain and includes a process of retrieval. Over
time it’s likely to morph. When I reviewed photos for this art piece, I was surprised at how inaccurate my memory was.

I heard when you have a memory, you’re actually remembering the last time you remembered it. But I don’t remember where I heard that.

But if that’s true, it implies memory is like an echo, changing and fading as it repeats. But why even have memories if they’re not going to be accurate? That doesn’t seem very real to me.

I suppose if our memory was 100% accurate, our brains might be as large as the mall’s space-age water fountains. So the next question is: what causes some memories to make the cut and not others? If I were to guess, the determining factor would be impact.

Speaking of which, many un-timestamped, imperfect memories later, I figured out where I was. This was Wausau, a regular 90-minute shopping pilgrimage for my family via Highways 13, 8 and 51 South. It was where my news, weather and pop radio stations came from. I was one of the many Northerners the developmental planners correctly presumed would be served by the mall. And boy, was I ever. It had more signage than my downtown. To me, being in the mall was like connecting to the civilized world.

The architectural and interior design of the mall sharply contrasted the detailed, traditional lines I was accustomed to in my hometown. It was a giant indoor Times Square, with interior elements that reflected its functionality. Sleek and streamlined—good design is intangible, like a thought or feeling. And I could feel the thought and care put into its precise, clean strokes. Like the highways and crossroads that brought people there, all lines seemed to converge and validate the mall’s aesthetic by the simple fact that Wausau was where it was at.

But while I was preoccupied with design, everyone else was using the mall the way it was intended. Commerce, employment, events—it was a place with reasons to be there, making it more than just architecture. It was a setting for memories. The decisions you made with your allowance, the lessons you learned at your first job, the jewelry you picked for that special someone, the friends you hung out with when you had time to kill, the decibel level of your scream on Santa’s lap… oh yeah… those memories had impact.

I chuckled to myself when I realized that, despite growing up in the same county, my husband and I met at the mall.

With all this reminiscing I may seem to be stomping down memory lane. I’m not. That would be a hypocritical move on the part of a digital artist. Indeed, I’m quite alright with technology, and the mall was the technology at the time. Who knew something as solid as the exchange of tangible goods could be partially replaced by the invention of something as abstract as web technology? Smaller, more nimble storefronts withstood the changes brought on by Internet shopping far better than my big, beautiful mall.

Sad as it was to say goodbye, the tradeoffs were worth it. I’m happy for the flourishing local businesses downtown and throughout Wausau Area. The mall may be gone, but the reasons to shop and do business here are still relevant, as evidenced by our thriving offices and always-bustling Rib Mountain Drive. Our economy still sustains its families and serves neighboring communities.

For this project, I’ve been thinking through the abstract and solid objects that made up the mall. Planners and architects created renderings using abstract lines which were then interpreted and built into a solid, real object. At least, I remember it being real. As imperfect as they are, memories are abstractions that confirm past reality. Now the mall is gone and all we have are memories. Are the memories more real than the building itself?

Perhaps the most solid thread of all is the reasons for the building’s existence. After all, reasons don’t suffer from inaccuracy like memory, and in this case, they prevailed despite changes in technology. Wausau is still a hub of economic stability. What’s more is the reasons justify future plans for the space. Have you seen them? They’re stunning!

In the meantime, I will look back fondly at the mall for what it was: the setting of many impactful memories.

Artwork created using Procreate on iPad Pro. Video and imagery assembled using Adobe Premiere Pro. **This year’s triennial Historic ARTspective year’s focuses on the people, places and industry of the City of Wausau in celebration of its 150 year anniversary.